We are a rescue household. Every cat and every dog (minus one) was a rescue to some capacity. We firmly believe in ‘Adopt, Don’t Shop’. Rescues need so much love and can be some of the best animals you can ever share a home with.

Anyway, we’ve got quite a few rescues, a couple of which you know about since they work for me. So, I wanted to introduce them to you:

My personal assistant. He was the offspring of two rescues, and I decided to bring him home to Idaho from his birthplace Virginia when the owner (my brother) couldn’t keep him.

He’s a grey and white fluff ball with a squeak of a voice. He wasn’t able to meow until about three months ago when he was able to squeak some sort of sound out. He’s headstrong and rebellious at times.

My caretaker. His mother was a feral kitty who would occasionally hang out on our porch when we fed the outdoor kitties. She gave birth in our basement, and kept her inside since. She and her other babies have since found new homes. I kept Willow as a birthday gift because he was born on my birthday. He’s a super purrer and loving. 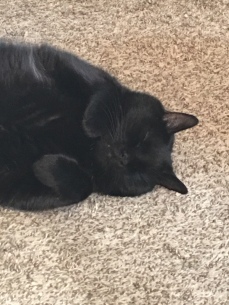 Our resident head black kitty. He was found under a highway overpass as a new kitten. Mother and my brother were the ones who found them. They were able to get all of the kittens, but the mama ran. Toothless was the only one not able to be adopted out because he’s a black cat, so he stayed with us.

He’s the head honcho of the family and puts all of the younger cats in line. He also loves sleeping on his back for some reason.

The baby. She was found outside of Vladimir’s work. Since we were known for cat rescue, his coworker brought her to us. We speculate she was abandoned because her head was a full 180 degrees from her body. She was a serious mess and had to have 24 hour care. She survived, is thriving, but she can’t be outside or she’ll get sick. We couldn’t find her an adequate home, so she’s with us still.

He was a barn cat found by one of Mother’s students, given to us again because we were known for cat rescue. He was healthy, just scared shitless. And again, we couldn’t find a home for him because he’s a black cat. Trust me, he’s scared of his own shadow; there’s no reason to be afraid of this poor baby.

Vladimir’s cat. She was found in a tractor tire in California with, I think, one or two other kittens. My roommate at my undergrad couldn’t find a home for her, so we took her when I graduated. She’s pure white with a yellow eye and a blue eye. She’s also pretty prissy. But she’s so cute!

He was an abandoned cat in our old neighborhood who was tortured by punk youth and stuff. We took him with us when we moved so he could have a loving home. 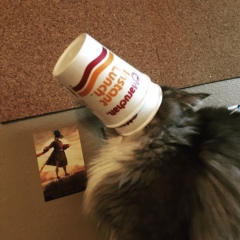 And our newest addition. We found him around the time we received shitty news, hiding in the corner of a cage at the vets office. He’s an 11 year old whose owner passed away and the family couldn’t care for him. He was at the vets for months because no one wants to adopt a senior kitty. We took him. He’s a sweet and playful thing once he realized he wasn’t going back to living in a cage.

And those are our rescues! Yes, I’m aware we have quite a few. Though, I blame circumstances for that. We still work with rescue organizations and the local shelter to help the animals abandoned, forgotten, or feral. Everyone deserves a good home.

If you are looking for a friend in your life, check out your local rescue organizations and shelters. They have tons of loving animals to connect with.