I recently had a meeting at work where someone who was hired with me asked what the dress code for the place was. Turns out we didn’t have one, as long as it wasn’t outlandish and remember what impression you want to leave with potential advertisers, etc. I asked about hair color. No rule! However, I may get looks because it’s a pretty conservative office. So, now I have thoughts about what I want to do with my hair.

Part of my relationship with my hair was heavily influenced by what color I was allowed to have. My undergrad university was a conservative school with dress codes, including not being allowed to have non-traditional colored hair. Right before I left for Glasgow, to a liberal arts foreign university, I dyed my hair blue. 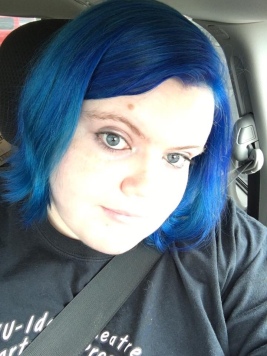 I wanted to do something new and something I was never able to do before, and that is have a ‘shocking’, non-traditional color. And I LOVED my blue hair. Did not regret it for a moment.

After I graduated, I entered a workplace where I could not have colored hair. Back to a natural color, and I went with my own natural strawberry blonde. There were moments I was bummed and just wanted to change my hair color, but alas.

Why is it such a big deal having colored hair in the workplace?

It’s self-expression and it doesn’t hinder from performances. It’s like tattoos (which some workplaces also banned). But how is it unprofessional?

So, I Googled it.

Some people say it’s a distraction. That’s not my fault. It’s the fault of the person who feels the need to judge silently. It doesn’t distract me from my job, and I’m still the same person I was when I had natural hair.

Some people say it’s a form of immaturity. To this I say: whatever. I have met far more immature natural people than immature ‘unnatural’ people. The most immature adult I have met was a natural person (and she gave people shit about having colored hair). One of the most mature people I’ve ever met had tattoos (she loves colored hair on others but not herself). Immaturity has no correlation with colored hair.

Now, there was an argument I saw that stood out because it gave some good arguments. It’s considered unprofessional in a job with high human interaction and “they might be unappeasing to the customer/client you’re dealing with, and you wanna retain your customers/clients.” (Link) Okay, fair. Not enough to ban it, in my opinion, but thanks for actually coming up with an argument.

If you have to abide to natural hair in the workplace, do it. I’m sorry you have to, but you shouldn’t threaten your position for it. Self-express in other ways. I’m fortunate that I was given a go-ahead, so hopefully I’ll have some colored hair to show you guys soon.