My birthday was this month, and two weeks ago I held a very special dinner party: a live Clue game.

I had other plans for my birthday, and still plan to do them, but there was something I wanted to do for my friends and family in my own home. I wanted to create something new they may not have ever been a part of before. I wanted to make a murder mystery!

The very first thing to do was create a story. The thing about Clue versus a general murder mystery dinner party is that in the game Clue you do not know if even you are the murderer. So, one of my hurdles was creating a story where no one knows who it is and it’s up to everyone to figure it out. While the movie Clue was a big inspiration, mostly for the dinner party part, I used completely different back stories to seven characters. That’s right, seven. I added Dr. Orchid when I accidentally invited one extra person. Here’s the general story: Miss Body is a consultant with City Hall and the seven guests have a connection to her and City Hall for various reasons. She was hit by a blunt object in a room in her house.

Now for the setup: I gave every one of my guests a character before they came, that way they can dress as they see fit. And I’m stoked to say, everyone dressed in relation to their character name. I had everyone sit and mingle at my dining table, and with the first course came an envelope with their character backstory and their ‘Clue cards’. 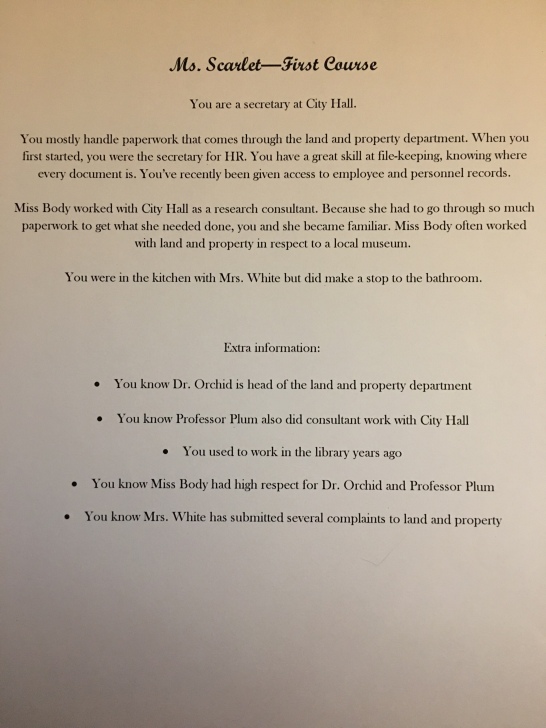 It is up to them to talk about it over their first course. Anything on the paper is fact, but they were allowed to embellish if they wanted, and they could share what they will. It is a game after all. The majority of my guests got into their roles and backstories, and had a blast talking. I only had one guest (poor friend) who was out of her depth and didn’t do much.

Second course brought them another envelope with a deeper and perhaps harsher backstory. The second course is where the claws came out and people started to accuse each other. I sat at the head of the table, watching everything unfold, and it was like the greatest form of entertainment.

With dessert came the answers. I gave everyone a slip of paper to write their accusations: the who, the where, and the with what. But thanks to backstories and a full-context game, I added the question of why. Why was Miss Body killed? Mother (who played Mrs. White) served the cake, and I got to announce that only my friend Brendan (who played Professor Plum) got every question right. His reward was the actual murder weapon (a book).

I had so much fun creating a story and preparing for a dinner party. Of course, there were drawbacks and stresses. No party is without them. But the overall party was a lot of fun and very entertaining. My friends commended my dinner (which I cooked) and fully complimented my story.

It was all worth it.

Some advice for creating a Clue game dinner party: 1. invite your guests ahead of time. I am ashamed to say I actually planned this last minute (a week in advance) and a lot of my friends were unable to come. Plan in advance so you have the friends you want there. 2. Come up with your solutions first. It was very easy to create a story around the solution so I knew what info was needed with what person. 3. Have real utensils. I had plastic party utensils, and several forks broke during the second course (cursed chicken). 4. Have fun. The story doesn’t need to be perfect, though it has to make sense. If you don’t want to cook, don’t. You can turn these characters into anyone you want. Just have fun with it.

Anyway, I do recommend a dinner party birthday, even if it’s not a murder mystery. It makes you feel special just having friends and family talking to each other around you.

Thanks to my friends and fam for making a great Clue game.